Investing in education and fostering the exchange of ideas and different approaches to communication, promoting the culture of prevention and its value for the individual and for public health: this is the mission of the second edition of the Sanofi Pasteur #PerchéSì Workshop. A contest that rewards innovative forms of communication to promote the value of vaccines by giving visibility to outstanding projects in the field of Italian healthcare. Sassari’s Project on the "Communication campaign for the influenza vaccination of the Sassari AOU" has been judged the best vaccination communication project in Italy. 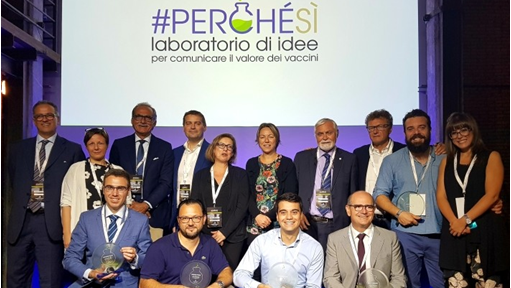 Numerous projects were put forward for the second edition of the contest and ‘hackathon’ #PerchéSì promoted by Sanofi Pasteur, the vaccine division of Sanofi which communicates the value of vaccinations and combats fake news: communication campaigns developed and launched by universities, research centres, associations, scientific communities, ASLs and health districts. In the running for first prize, the 10 finalists participated together with thirty young creative minds and communicators as scientific mentors in the first Italian hackathon on vaccine communication. The winners were chosen from 54 projects, 31 in the "ASL and social and health districts" category and 23 in the "Universities, Scientific Societies, Hospitals, Associations and Foundations" category.

In the ASL category, the ATS Milano Città Metropolitana’s Project, which used the universal language of sport to communicate the value of vaccination. The winner of the category University-Scientific-Hospitals the Vaccination Campaign "Gli Operatori sanitari dell’AOU di Sassari in campo per la vaccinazione", of the University of Sassari, conceived and designed by Prof. Paolo Castiglia with the Vaccinarsi in Sardegna team (Dr Antonella Arghittu, Dr Marco Dettori and Dr Andrea Cossu) under the University Hospital of Sassari (with the endorsement of Dinamo Basket) in collaboration with the Hospital’s Medical Directorate, the Medical Officer, the Department of Medical, Surgical and Experimental Sciences and the Hygiene and Preventive Medicine Specialisation School of the University of Sassari.

The 2014-2018 Regional Prevention Plan of the Region of Sardinia provided for a communication campaign calling upon healthcare professionals to set a good example. In fact, among the Plan’s many activities, a large section is dedicated to the Development and Reinforcement of Vaccinations. Hence the objective to propose these activities to all citizens with the encouragement of the Regional Department and the cooperation of all institutions operating in Sardinian Public Health, with the ATS at the forefront.

In the words of Prof. Paolo Castiglia: “The idea of extending the project to all citizens and not only to health professionals stems from the fact that our campaigns used to be aimed at single vaccinations but we now have many vaccines available. The Vaccinarsi in Sardegna project, instead, aims to launch an inclusive campaign for vaccination, starting with health workers, then adults and the elderly and finally reaching the very young, with the ultimate goal of improving vaccination culture."

"The close collaboration of all the regional institutions working together in a widespread manner throughout Sardinia territory had yielded results and was the main success story of this project. The University Hospital of Sassari with the collaboration of the Health Protection Company of Sardinia and the University of Sassari together with the Vaccinarsi in Sardegna Team, have in fact represented the driving force of this ambitious project", comments Antonella Arghittu, manager of the Vaccinarsi in Sardegna website.

The University of Sassari has long been aware of its importance of the role as the main aggregator and driving force of culture, innovation and science for the social and economic development of Sardinia. It actively and proactively interacts with society on an international, national and local level and collaborates with public and private institutions, also by virtue of its integration with healthcare thanks to the activities of the Sassari AOU, and has played a key role in involving citizens and spreading knowledge of vaccinations in this year of activity, even outside the academic context. In this way, it has contributed to social growth and the cultural direction of Sardinia. (Public Engagement).

In today’s socio-cultural environment, the profound social and cultural transformations that have occurred in recent decades have in fact called for a renewed approach to university teaching, steadily modifying and strengthening the collaboration between public bodies and citizens. Current scientific dissemination, by embracing much broader socio-cultural issues than in the past, not only focuses on the aspects inherent to teaching itself, but also on personal services, on health services provided, on the relationship between intellectuals and the population, on social relationships and on culture as a whole, and develops as a series of extremely heterogeneous media spaces for content and means of expression. The University, in fact, encourages and enhances the activities and events with educational, informative and social development value involving the general public and the various stakeholders, with particular attention paid to the impact and benefits they offer to society.

"The jury this year was particularly impressed by the campaigns designed and by the new ideas elaborated in yesterday’s #PerchéSì hackathon. They demonstrate how scientific communication has accelerated and invested heavily in recent years to counter fake news and disinformation. A lot of progress has been made above all in the ability to listen and embrace new ways to communicate and reach people authoritatively and competently", explained Paolo Bonanni, Professor of Hygiene and Preventive Medicine at the University of Florence, coordinator of the "Calendar for Life" group and co-President of the #PerchéSì jury.

"Our #PerchéSì project is innovative, inclusive, courageous and contemporary. As Sanofi Pasteur, for the second year running, we have listened to health experts and enabled them to meet with those who study the medical-scientific communication of tomorrow. Today, as a company it is our duty to create opportunities for discussion between all stakeholders to identify, in this case, new strategies for communicating the value of vaccination. It is in the meeting point between science and communication that a difference can be made for the community", added Mario Merlo, General Manager of Sanofi Pasteur in Italy.

The Vaccinarsi in Sardegna team wishes to thank all institutions that participated in the project, Dinamo Basket, who lent their image to this campaign, but especially the whole community and the loyal users who trust our Information and Communication Portal to answer their questions competently, to guarantee the validity of the information requested and to offer support in the decision-making process. The success of this initiative is in fact due to the trust that the people of Sardinia, and from elsewhere, constantly place in all of us health workers, in the hope that the collaboration between institutions and citizens will become even more participatory and unanimous to achieve the minimum objectives to guarantee a future rich in health and well-being for each individual.