World Health Day is an international event held every year on 7 April to mark the anniversary of the founding of WHO on 7 April 1948. World Health Day, which is annually named after a key focus area, is dedicated to raising awareness of specific issues in a bid to help achieve a higher standard of human health worldwide. This year's theme, made official by WHO, is 'Our Planet, Our Health' with the intention of turning the spotlight on air pollution and environmental protection. 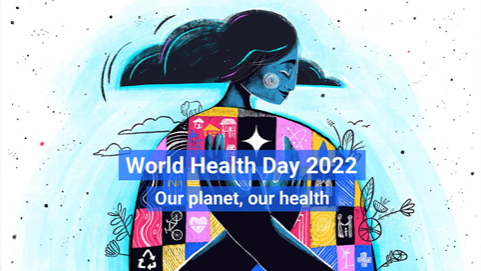 Air pollution refers to the presence of substances that change the natural composition of the air in such a way that human health or the quality of the environment is impaired or endangered. The effects on human health may be acute, usually irritating the eyes, mucous membranes and upper respiratory tract, or chronic, due to medium and long-term exposure. The most serious disorders occur in the respiratory system, resulting in increased hospitalisation for diseases such as bronchitis and asthma. Epidemiological data show a positive association between increased air pollutant concentrations and increased mortality from respiratory and cardiovascular causes. According to WHO, more than 90% of people breathe unhealthy air from burning fossil fuels and, each minute, 13 people die from cancer, heart attacks and other cardiac diseases caused by air pollution.

Climate change, mainly driven by the massive use of fossil fuels, has a major impact on human health and is the greatest health threat to humankind. Global warming can increase the frequency of extreme weather events (thunderstorms, tornadoes, severe heat or cold spells, prolonged dry periods), leading to increased mortality. The consequences for the agricultural sector compromise food availability and safety, while both scarcity and excess of water resources are linked to an increased risk of diarrhoeal diseases and infections in general. It is estimated that 3.6 billion people globally lack safe sanitation and 2 billion people lack safe drinking water due to polluted groundwater.

Changes in temperature and rainfall distribution cause insect vectors to migrate, resulting in the appearance and spread of new infectious diseases in non-endemic territories. It is estimated that over 40% of deaths from malaria and about 94% of deaths from diarrhoeal diseases could be prevented by appropriate environmental policies. Pollution and plastics are deposited on the ocean floor, on mountains and make their way into the food chain. At the same time, the production of highly processed and unhealthy food and drink, generating one third of global greenhouse gas emissions, is driving an increase in obesity, cancer and heart disease. According to WHO, between 2030 and 2050 climate change could cause an additional 250,000 deaths per year from malnutrition, malaria, diarrhoea and heat stress. Approximately one million lives per year worldwide could be saved by reducing air pollution alone.

The COVID-19 pandemic in particular has revealed some of the shortcomings and disparities of contemporary lifestyles and has underlined the urgent need to build a more sustainable society, focused on well-being and health. It is therefore clear that environmental policies are key determinants in the development of chronic diseases, making it all the more necessary to adopt policies aimed at reducing environmental exposures that are harmful to health. These objectives translate into long-term investments, greater social protection and widespread wellness strategies that allow more and more people to fully enjoy their right to health.

On this significant occasion of World Health Day, Vaccinarsinsardegna.org wishes to take the opportunity to reiterate the relevance of one of the main, essential measures ever discovered by man to safeguard something as precious as health: vaccines. Especially today, when the spread of OMICRON variants poses difficulties for Public Health, it is even more important to stress the importance of continuing the anti-COVID-19 vaccination campaign in order to protect the most vulnerable population groups, childhood and adolescent cohorts and the entire population in this long struggle against the pandemic.

“Are we able to reimagine a world where clean air, water and food are available to all?

Where economies are focused on health and well-being?

Where cities are liveable and people have control over their health and the health of the planet?”

With this slogan, we invite users to stay tuned to our site so as not to miss the next updates.

Dr.ssa Giovanna Deiana - Medical Director at the Hygiene and Infection Control Unit of the Azienda Ospedaliero-Universitaria (University Hospital of Sassari)