On the occasion of World Polio Day, which has been celebrated on 24 October every year since 1988, the European Region of the World Health Organisation celebrates 20 years of freedom from polio. On this important anniversary, the European Region has a powerful message for the public: 'only by working together and harnessing our collective energies to overcome the last obstacles, can the promise of a polio-free world for all be fulfilled'. This historic milestone was only made possible thanks to the unwavering dedication of parents, governments, volunteers and civil society organisations, who, together with the tireless efforts of health workers, work relentlessly to make vaccination a priority for every child in Europe and around the world. A key role in the fight against polio is also played by surveillance policies and activities, which, in order to ensure that 'polio-free' status is maintained, are indispensable for the detection and prompt interruption of poliovirus circulation in the Region. 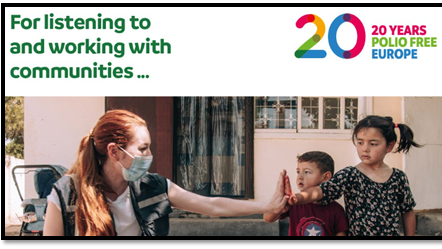 October 24, 2022 marks the important anniversary of World Polio Day and the 34th anniversary of the Global Polio Eradication Initiative (GPEI), conceived in 1988 by the five partners: the World Health Organization, Unicef, the US Centers for Disease Control and Prevention (CDC), Rotary International and the Bill and Melinda Gates Foundation to eradicate polio on a global scale.

Despite numerous efforts and all the hard-won goals, in this two-year pandemic, the standstill caused by the COVID-19 health emergency in the pre-vaccine era and the persistence of conflicts and ethnic and religious barriers in the very countries where polio outbreaks were still endemic, prevented polio vaccines from reaching every child, thus contributing to a new increase in cases of the disease. In 2020 alone, in fact, 1,226 cases of all forms of polio were recorded compared to only 138 in 2018.

This shows that, in spite of the constant activities of the WHO and its partner agencies which have made the European region polio-free for two decades, the disease is, unfortunately, still a grim reality that continues to claim numerous victims in terms of both disability and mortality.

In fact, the recent scares in London and New York have brought past fears to the forefront and confirm a sad reality: polio is, unfortunately, still present. Even before these scares, the European Region was fearful over the polio outbreak in Ukraine, which started in 2021 and is still ongoing. Then, in February 2022, barely two years after the declared eradication of polio in the African region (after Cameroon and Nigeria, the last countries where cases had been detected, had not recorded any polio outbreaks for more than three years), the health authorities in Malawi confirmed the case of a three-year-old girl infected with the wild poliovirus and left paralysed (according to WHO, the strain of the virus identified in the child is type 1 - WPV1). In addition, another industrialised country, Israel, where the virus had already been reported in circulation following the war and displacements from Syria, recorded a case of polio in March this year, the first since 1989. Just a few months ago, the polio virus was detected in a sewage treatment plant in Beckton, and, successively, concern grew in New York about hundreds or even thousands of possible undiagnosed cases of polio following the case of an unvaccinated man paralysed by the virus in Rockland County. This prompted the New York health authorities to vigorously urge the non-immunised population to vaccinate in the short term. In fact, as no drugs are currently known to cure this disease, the only means of defence is preventive vaccination.

Poliomyelitis is an acute, highly contagious infectious disease caused by viruses (polio viruses, belonging to the Enterovirus genus) that affect the nervous system, involving neural cells and inducing paralysis which, in the most severe cases, can be fatal. The virus only infects humans and is transmitted faeco-orally, through the ingestion of contaminated water or food, or through saliva and droplets emitted when sick people or asymptomatic carriers cough or sneeze. Regardless of the transmission mode, the poliovirus enters the body through the mouth and multiplies in the oropharynx, tonsils, lymph nodes in the neck and gastrointestinal tract (small intestine). Human cells have specific protein receptors to which polioviruses can adhere and thus penetrate susceptible cells. The infection evolves through cycles of viral replication, leading to the destruction of infected cells. Once infection is established, polioviruses can reach the central nervous system through the blood-brain barrier, through the blood stream or through nerve fibres. Viral multiplication destroys motor neurons, which do not regenerate, leading to functional inability of the affected muscles, although in some rare cases it is possible to recover full muscle function. The only means of protection is preventive vaccination.

Since 1996, thanks to the eradication campaign, 9 billion doses of oral vaccine have been distributed, 1.8 million childhood paralysises have been avoided, and 180,000 lives have been saved. Now, as underlined by WHO, it is crucial that countries continue to be even more vigilant and careful: if preventive vaccination is neglected, wild polioviruses could return and spread. In fact, polio is still endemic in Afghanistan and Pakistan, and the persistence of epidemic outbreaks, even if localised in geographically limited areas, poses a risk to the population as a whole.

As such, World Polio Day has enormous significance. The day of 24 October was chosen as it commemorates the birth of Jonas Salk, the inventor of the vaccine against the disease. On this occasion, with events promoted and organised all over the world, we commemorate the great achievements made to date thanks to the multi-centred cooperation and joint support of the many institutions, bodies, organisations, associations and foundations that work together in unison to fight this disease.

As in previous editions, this year's campaign will continue to use the slogan 'End Polio' to support global eradication efforts, including continued vaccination against the disease as well as continuing epidemiological surveillance actions.

To celebrate the efforts to date and renew commitment to future work, WHO/Europe has launched a social media campaign and will host a commemorative event today at the UN City Building in Copenhagen, Denmark, from 17:00 to 18:00 CET. A film will also be screened and an exhibition on its themes will be on display for participants, staff and visitors in the UN City Building. The event and exhibition will address the historical impact of polio in the region, how polio-free status was achieved and maintained, and how to ensure that this status is sustained in the future.

The event will be opened by WHO Regional Director for Europe, Dr Hans Henri P. Kluge, and will include representatives of the Global Polio Eradication Initiative, including Rotary International President Jennifer Jones.

There will also be numerous national and local initiatives promoted to mark this important occasion. Among the many events organised by the various Rotary Clubs, we wish to highlight some of the initiatives promoted in Sardinia: two clubs in Sassari organised a 'suspended coffee' yesterday, 22 October 2022; Rotary associations in the metropolitan area of Cagliari organised a "Passeggiata al Poetto" (stroll along the Poetto) meeting today, but events may continue throughout the week, such as the suspended coffee organised by the Rotary Club of Sassari.

"Un buon caffe per una buona causa", held in Sassari last Saturday 22 October from 8.00 am at via Vardabasso 1/b.

"Prendi un caffè e dona un vaccino - Il caffe sospeso", held in Sassari next Saturday 29 October from 9.00 am at the Bar Quadrato in Via G. Chironi,11.

In this context, Vaccinarsinsardegna.org invites users to support these worthy initiatives, aimed at financing the purchase of polio vaccines for endemic areas in developing countries, but above all invites them to conscientiously adhere to the vaccinations and vaccine boosters included in the vaccine schedule, which obviously includes the polio vaccination. In this regard, we would like to remind you that the polio vaccine schedule for our country provides for the administration of 3 doses of inactivated polio vaccine (IPV) during the first year of life, with a further two booster shots at 6 and between 12 and 18 years of age.

Keep connected to our website so as not to miss future updates.