The agent responsible is a bacterium called Neisseria Meningitidis also called Meningococcus. Thirteen types (serotypes) of Meningococcus are currently known, but only five (A, B, C, Y, W135) are clinically relevant and capable of causing disease and epidemics.

Attention. Explicit images in the article

This article contains images that some readers may find upsetting.
To show and / or print the hidden images, click here.

There are 13 different serotypes of Meningococcus, although only six cause meningitis and other serious diseases: most frequently A, B, C, Y and W135 and more rarely in Africa, X.

Serotypes B and C are responsible for most cases in Italy, Europe and the Americas, although cases attributable to types Y and W135 are also increasing. Serotypes A and C prevail throughout Asia and Africa, and serotype W135 is identified for the meningitis occurring among pilgrims returning from Mecca and for epidemics in Africa.

Transmission occurs through nasal and pharyngeal droplets from infected people or carriers. The incubation period lasts from 2 to 10 days (on average 3-4 days). The age group most affected is children under 5, but it also affects also adolescents and young people up to 25 years of age. In the case of international travellers, adults are also susceptible.

The most common presentation of invasive meningococcal disease is meningitis. Symptoms of meningitis include sudden onset of fever, headache, and stiffness in the neck, often accompanied by other symptoms, such as nausea, vomiting, photophobia (sensitivity to light), and altered mental status.

The symptoms therefore are no different from those of other bacterial meningitis, but in 10-20% of cases the disease is rapid and acute, with a fulminant course that can lead to death within a few hours even if adequately treated. Meningococcal sepsis (septicemia or meningococcal meningitis) occurs without meningitis in 5 -20% of invasive meningococcal infections. This condition is characterised by the sudden onset of fever and rash, often associated with hypotension, shock, and multi organ failure. Less common presentations of meningococcal disease include pneumonia (5-15% of cases), arthritis (2%), otitis media (1%), and epiglottitis (less than 1%). Patients with meningitis or other severe forms are considered contagious for approximately 24 hours from the start of specific antibiotic therapy. Infectivity is low, and secondary cases are rare. However, N. meningitidis can give rise to epidemic outbreaks: surveillance and antibiotic prophylaxis of close contacts, which must be evaluated on a case-by-case basis, is important to identify who is likely to present with fever, in order to diagnose and quickly treat any further cases.

This surveillance is scheduled for 10 days from the onset of the patient's symptoms.

According to data from the World Health Organisation, the highest rates of Neisseria meningitidis in the world are recorded in the so-called meningitis belt, an area covering approximately 26 countries of sub-Saharan Africa, from Senegal to Ethiopia. In this region of about 300 million inhabitants, the disease is endemic and the dry season favours its spread. In the meningitis belt, meningococcal strain A is responsible for about 80-85% of all cases, with intervals of 7-14 years between one epidemic and another. In 2009, 14 African countries reported the highest number of cases since the 1996 epidemic: 88,199 suspected cases, of which 5,352 were fatal. In fact, in this area in 1996, the most serious epidemic of meningitis ever recorded occurred, with about 250,000 cases and 25,000 deaths in Niger, Nigeria, Burkina Faso, Chad, Mali and other neighbouring countries. The lack of vaccinations and healthcare systems undoubtedly affected the proportions of the epidemic. 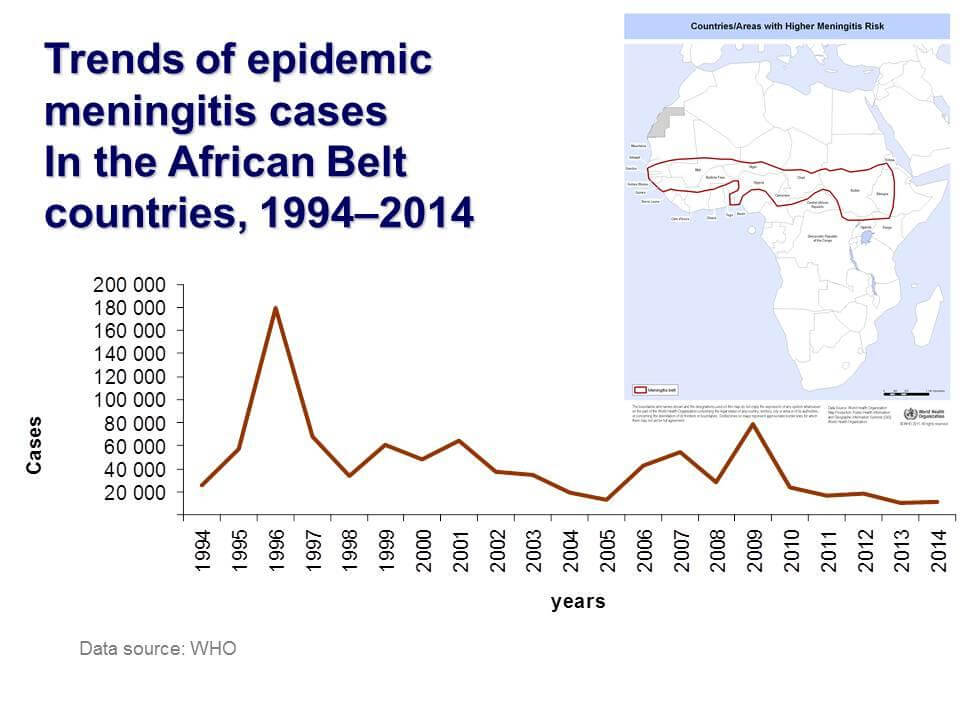 In the meningitis belt, large-scale epidemics occur every 5-12 years with rates reaching 1,000 cases per 100,000 inhabitants, and historically serogroup A accounts for 90% of meningococcal disease cases and most large-scale epidemics. From 2010 onwards, these countries have carried out mass vaccination campaigns with a monovalent conjugate vaccine against Meningitis A. This has led to the progressive elimination from these areas of epidemics from serogroup A; recent epidemics were mainly due to serogroups C and W, with outbreaks of X.

Starting in 2010, in areas of Africa at risk of epidemics, a conjugated vaccine (MACV) was progressively introduced: this preventive action has drastically reduced the number of cases of serotype A meningitis in this area. 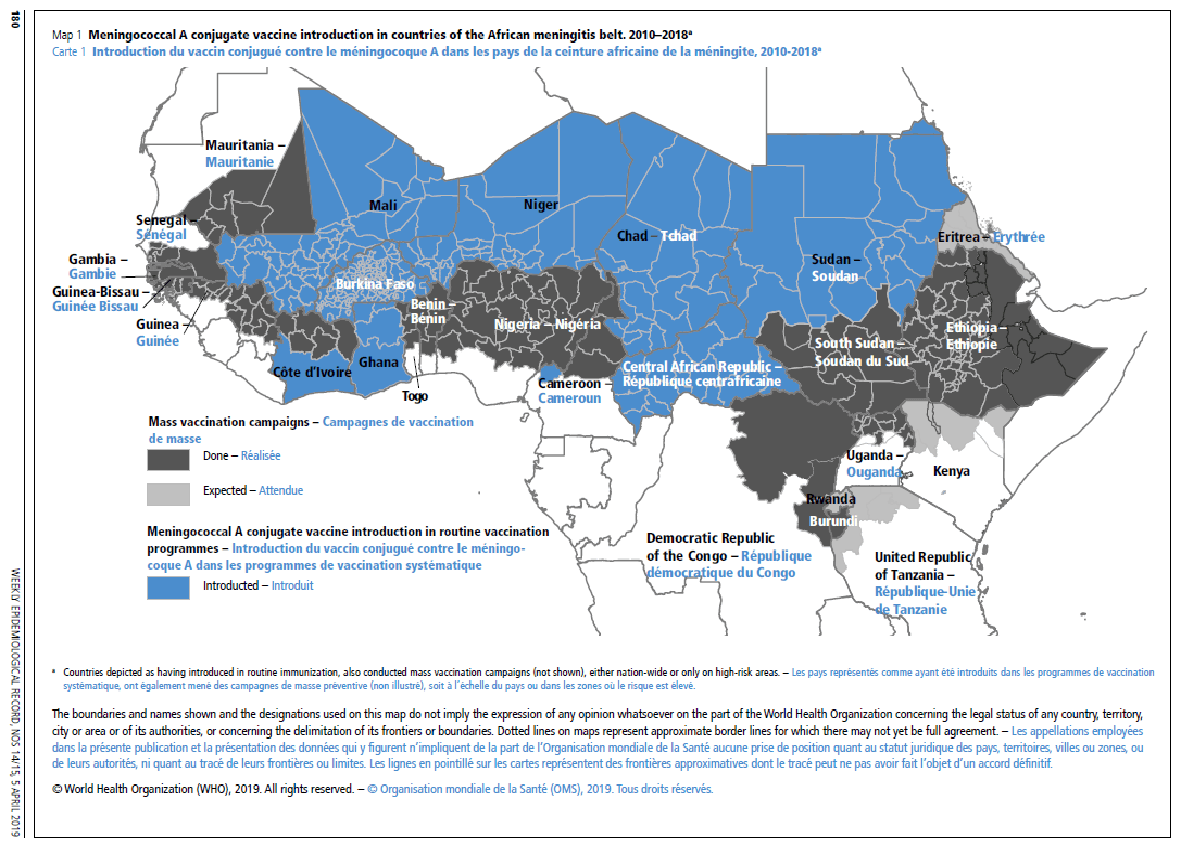 A global strategy with the aim of "defeating meningitis by 2030" will be implemented by a technical taskforce led by WHO. In summary, the goals to be achieved by 2030 are: (1) to eliminate meningitis epidemics. (2) to reduce the number of cases and deaths from vaccine-preventable meningitis by 80%. (3) to reduce the impact of sequelae by 50%. The strategy will be built around five pillars: prevention and control of epidemics, diagnosis and treatment, disease surveillance, support and care for patients and their families, and advocacy and commitment. The strategy is under preparation in coordination between key stakeholders and technical advisory groups.

In high-income countries with a temperate climate, the number of meningitis cases is rather sporadic (increasing in winter and spring). In Europe and the United States, most cases are of meningococcus B and C. In the last ten years, the introduction in many European countries of mass vaccination against the C strain of meningococcal disease has significantly reduced the number of reported cases of this serogroup. According to ECDC data, 3,819 cases of invasive meningococcal disease were reported in Europe in 2010 (3,710 with laboratory confirmation).

In Europe, according to ECDC data, 3,221 confirmed cases of invasive meningococcal disease were reported in 2017.

In 2016, serogroup C was most prevalent (42.1% of strains identified) reflecting the increase in cases of meningococcus C in Tuscany, particularly among adolescents and young adults, as described in the previous epidemiological report. On the other hand, serogroup B was predominant in 2017 (41.3% of strains), this appears to be confirmed in 2018(*).

Between January 1 and March 31, 2018, seven cases of invasive meningococcal disease, in previously unvaccinated individuals and with a clinical presentation of meningitis/sepsis, were reported by the Region of Sardinia (a much higher number than expected). Two cases were epidemiologically linked to each other but not to the remaining five cases. Epidemiological investigation established that individuals in the five cases had attended the same disco in the two weeks prior to the onset of clinical symptomatology.

Serogroups W and Y, which were less frequent overall, particularly in 2017 and 2018*, were reported more frequently in subjects aged 15 or over.

In Italy, the most frequent serotypes are B and C. From the data by age group and serogroup we can see a decrease in the number of reports of invasive diseases from meningococcal serogroup C in children under 10 and in teenagers and young adults since 2010. The incidence of meningococcal invasive disease in Italy in 2010 is 0.24 per 100,000 inhabitants. Data from 1995 to 2010 show a peak in 2004 (0.6 / 100,000) and, in recent years, a decrease in incidence (0.3 / 100,000 in 2006-2009 and 0.24 / 100,000 in 2010). As regards meningococcal meningitis, in Italy the incidence is lower than in the rest of Europe. Regarding serotypes, type B was prevalent from 1994 to 2003. Serogroup C, after a rapid increase between 2000 and 2005 (in 2004 and 2005 it was more prevalent than serotype B), saw a significant reduction in cases up to 2006, presumably due to the increase in the specific vaccination offer. B and C strains remain the main ones to date; in recent years there has been an increase in the former and a parallel decrease in the latter. In total, between 2001 and 2007, 447 cases of meningococcal meningitis from group C were recorded in Italy, with 63 deaths (14%). At least two-thirds of meningococcal meningitis cases in Italy are sporadic; however, even small outbreaks (or clusters) occur. From 2001 to 2007 in Italy, there were 48 small meningococcal C clusters (defined as at least 2 cases over 30 days within a radius of 50 km). The vast majority of these clusters occurred in the northern and central Regions. In Veneto, between December 2007 and January 2008 there was an outbreak of meningococcal C meningitis/sepsis. In the Province of Treviso between 13 and 15 December 2007 there were 7 cases of meningitis/sepsis from Neisseria meningitidis with three deaths. Two other cases occurred in Conegliano and Mestre. In Italy, following the introduction in 2006 of the anti-meningococcal C vaccine, the cases of disease have been drastically reduced: from 115 cases in 2005 to 28 cases in 201. (ISS data updated to 18.12.2012).

A new challenge comes in the form of invasive diseases of Meningococcus B, as at present this serotype is responsible for the greatest number of cases of meningococcal meningitis. The use of the Meningococcus B vaccine was recently approved by the European Medicines Agency (EMA), and as such, individual Member States will have to decide whether to include it in national vaccination schedules.

Given the availability of the Meningitis B vaccine, it is hoped that adequate vaccination coverage will be reached in the age groups and population groups most at risk so as to prevent the spread of this serogroup.