The Italian Medicines Agency (AIFA) has announced that as a precautionary and temporary measure, pending the decisions of the European Medicines Agency (EMA), the use of AstraZeneca vaccine has been suspended throughout the country. This precautionary decision has been taken in line with similar measures taken in other European countries. Updates will be promptly communicated as they become available, including further details on how those who have already received the first dose of vaccine should complete the vaccination cycle. 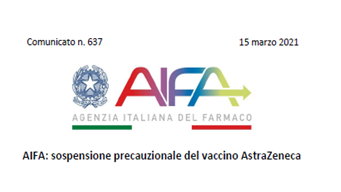 The Italian Medicines Agency (AIFA) has taken the decision, as an entirely precautionary and temporary measure, to extend the suspension of the use of the AstraZeneca vaccine throughout Italy, pending the European Medicines Agency's (EMA) decision in the coming hours. The decision to suspend the administration of the AstraZeneca vaccine was taken following talks between Italian Prime Minister Mario Draghi and Health Minister Roberto Speranza.

Vaccinarsinsardegna.org reports the words of the President of the Italian Society of Hygiene, Preventive Medicine and Public Health (SItI), Dr. Antonio Ferro: "The probability of serious adverse events in those who have been vaccinated are exactly the same as in those who receive a placebo solution in place of a vaccine. This is what has emerged from the scientific studies which approved the COVID19 vaccines currently on the market. It is therefore extremely unlikely that thrombosis will occur as a result of vaccination. However, everything is being monitored to investigate these events, including scrupulous testing to analyse what is contained in the vaccine and to rule out death as a result of vaccination. The two recent cases, close to each other, show that it is not all linked by a cause-and-effect relationship (as a result of vaccination), but most probably by the propensity of the two people to be affected by that pathology'.

The Vaccinarsinsardegna.org team, moreover, having consulted representatives of the companies that today administered AstraZeneca vaccines in Sardinia, in line with the bulletin issued by the President of AIFA and the President of S.It.I., wishes to reassure all of our users. The risk conditions of adverse reactions remain unchanged compared to the past and it is reiterated that there are no elements of further concern as this decision was taken wholly as a precautionary measure.

Finally, Prof. Paolo Castiglia and Dr. Antonello Serra, coordinators of the AntiCOVID-19 Vaccination Campaign of the Azienda Ospedaliero-Universitaria di Sassari, have informed us that the vaccinations scheduled for tomorrow at the vaccination clinic have been cancelled. All users on the vaccination list will be contacted by phone (and/or by CUP) in the coming days to schedule a new appointment.

Stay connected so as not to miss further updates.

Attached is the AIFA press release (Italian only).